Resolve6 offers the best Software Test Automation training in Brampton and Mississauga, we cover both individual training courses on the top automation tools and also cover a comprehensive 101 skill development as part of our Software QA Job Placement Program.

Test Automation is becoming critical in enterprise project environments over the past few years. Looking back a decade ago, software test automation approach was dominant using only specific set of industry-leading test automation tools like QTP (Now referred as UFT or the even more upgraded agile version LeanFT), however, these tools came with a significant cost which made it a roadblock for companies to adopt the cost-savings approach. It had become evident over the years that software test automation could save time, effort, save project cost, and also increase the capability of the test teams to do a comprehensive test coverage. With the concept of DevOps coming into the picture, the process of adopting and implementing an effective test automation approach became more achievable for companies. 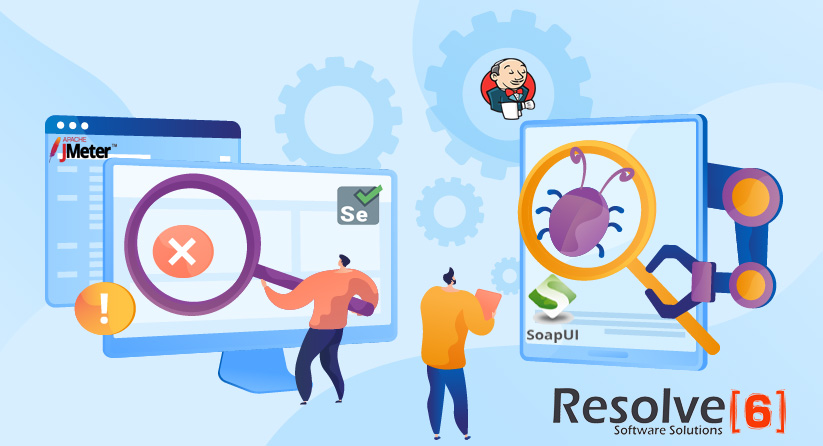 So, what is DevOps?

DevOps, is a synergy of Development effort and Operational workflow, the two areas which are a mandate to be effective and efficient for a business application to perform to its best abilities, and improve the business thru information technology.

DevOps comes with a concept of using a stack of automated tools, which can handle and streamline the effort to handle planning, development, testing, implementation and monitoring the application or the system during its use in the real world.

Resolve6 over the years has been helping aspirants who want to kick start their career in Information Technology or for individuals who want to upgrade their skills to be considered for better job opportunities. We understanding the importance of the skills required to become an efficient part of the DevOps methodology, so we consider the scope to cover the essential skills required to know the stack of tools that will allow the candidate to be the best candidate for a job opportunity.

Here is a list of Software Test Automation tools, that we cover as part of our job placement program here in Brampton.

Selenium is a lightweight Software test automation framework. Selenium can be used with a wide range of development technologies like Java, Phyton, C#, PHP. It provides a playback capability to author functional tests without the need to learn a language for test scripting (Selenium IDE). The tests can then run against all type of browsers running on various kinds of operating systems, which include Windows, macOS, and Linux

Apache JMeter is open-source software; its a 100 percent pure Java application designed to load functional behavior testing and performance measurement. JMeter was initially meant to evaluate Web applications but has since extended to provide other software features

Read more about JMeter at

What is JMeter ? A Beginners Intro to Performance Testing !

JIRA is a very popular tool, which is used to track bugs,

issues, and to manage projects. JIRA is a very popular tool extensively used in Agile Projects. Jira is covered as part of the Software Test Automation training in Brampton.

Confluence is a shared web platform used to support teams to communicate efficiently and exchange information. With confluence users can get the comprehensive handle on project specifications, connect, communicate, delegate assignments to project participants, and handle multiple calendars as well.

Postman is a versatile tool for checking the API which easily integrates into the CI / CD pipeline. API is the application programming interface that enables software programs to connect via API calls. Post man is covered as part of our Software Test Automation training in Brampton

with a rich plugin ecosystem built for Continuous Integration (DevOps).

GitHub is a storage site for the Git server, which incorporates all of its functionality. While Git is a command-line device, GitHub offers a graphical framework based on the Internet. This also offers access control and other sharing functions for any project, such as a wiki and simple task management software. Git is very popularly used as a Test automation repository. We at resolve6 also use Git during our Software Test Automation training in Brampton

We cover test automation courses as part of our job placement program for aspirants all over the GTA, which include Brampton, Mississauga, Toronto. Check out our upcoming programs at https://www.resolve6training.ca/upcoming-programs/