Register for the course

Test Automation is now critical in enterprise project environments over the past few years. Looking back a decade ago, the software test automation approach was dominant using only a specific set of industry-leading test automation tools like QTP (Now referred as UFT or the even more upgraded agile version LeanFT), however, these tools came with a significant cost which made it a roadblock for companies to adopt the cost-savings approach.

It had become evident over the years that software test automation could save time, effort, save project cost, and also increase the capability of the test teams to do a comprehensive test coverage. With the concept of DevOps coming into the picture, the process of adopting and implementing an effective test automation approach became more achievable for companies.

Test Automation professionals are in-demand throughout industries including retail, eCommerce, finance, and technology.

With the IT industry moving towards DevOps, a concept of using a stack of automated tools, which can handle and streamline the effort to handle planning, development, testing, implementation and monitoring the application or the system during its use in the real world.

Resolve6 over the years has been helping IT aspirants who want to kick start their career in Information Technology or for individuals who want to upgrade their skills to be considered for better job opportunities. We understand the importance of the skills required to become an efficient part of this new evolving IT industry, and we consider the need to cover the essential test automation skills required to know and allow our trainee to be the best candidate for a job opportunity. 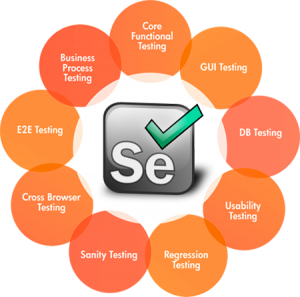 Join Canada’s top QA Selenium training offered both “in-class” and online for Beginners. This program is purely designed for individuals who want to start their IT career in Selenium, or for manual testers who are looking to step up their skill set with Selenium. Our program includes hands-on training with a Live Project experience.

Resolve6 offers QA Selenium training, which will train and align test specialists to deliver test automation solutions using Selenium. Selenium is currently one of the most popular Automated Testing suites in the market. Selenium is designed to support and encourage Automation Testing of all the functional aspects of web-based applications on a wide range of browsers and platforms. Due to its existence as an open source tool, it has become one of the most accepted tools among the testing projects.

As part of this six week (36 hours) QA Selenium training, the following will be covered.

What is Automation Testing?

Automation Criteria (Whether to Automate or Not)

● Introduction to Selenium and WebDriver

Installation of Eclipse (for Selenium WebDriver Programming in JAVA)

Configuring your machine for Selenium

Selenium WebDriver ( How to use WebDriver, WebDriver drivers, Writing

Locator Strategies ( By ID, By Name, By Link, By PartialLink, By XPath, By CSS Selector, By Tag, By Class )

How to work with Date Picker

Commands to deal with Alerts, Popups and Multiple Windows

Sequence of Evaluation and Flow Control

Verifying Page Elements and their Attributes

Why WebServices are Being Used

How to create project and add multiple WSDL to one project

How to add and implement

How to add Assertions and validate different scenarios in Request / Response

XML and compare with pre defined data from Properties.

Defining variables to get the data from properties

If condition, for loop, etc.

How to debug the script, log.info etc.

JDBC Connection. Write script to connect to Database and retrieve the data and compare the data with the response xml

Functions in other Units and Projects

Using Groups within an Object Checkpoint

How Do I Get Issues Done?

How Do I Find Issues?

How Do I See What’s Being Done?

How to use Confluence

Is Test Automation in Demand ?

How much time does it become a Test Automation Expert ?

Test Automation specialists should spend 10 hours per week during the training period, practicing what they have learnt in the class. With this approach, within 5-6 weeks, you will feel very comfortable with the tool and also be ready to work on an automation project.

How is the career growth in Software Testing ?

In recent times, software testing is seen as a great professional career for many. From being a test engineer, one can grow to become a senior test engineer, from a test lead to a test manager; or alternatively, one can become a QA Lead or QA Manager. Moreover, the options available in the testing tools side are vast for a rewarding career growth.

Get Training in Data Science and Machine Learning using Python